A familiar sadness fills our hearts every time we see bands posting that their gear was stolen out of their van. Nothing feels quite as violating as being stolen from.  If this has never happened to you… trust me, it’s sheer dumb luck that you haven’t been a victim  yet. 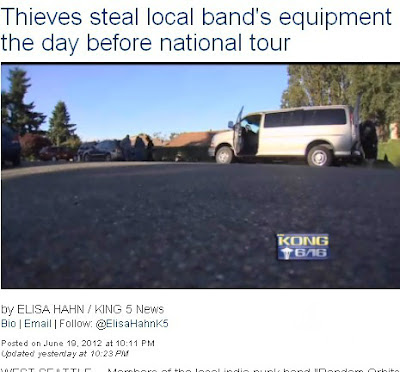 In an age of social media where we flaunt our business to maximize exposure, advertise our thoughts and use the Facebook check-in feature to say where we are…. make no mistake about it… YOU-ARE-BEING-TARGETED (sometimes even before you get to the venue) and you’re making it easy for them.

This isn’t meant to sound like a Negative-Nancy or Debbie-downer. Protect your band; protect your livelihood. Everybody loves having drinks and having a good time after a show, but someone is watching you. Even if you aren’t noticeably being watched, assume that you are. Get everybody and everything home safe so you can rock again another day.

By simply protecting your band and your gear, you won’t make yourself an easy target. Trust us, people don’t walk up to you and say they’re stealing from you (at least, not very often.) They wait until you’re not paying attention.  Are we being paranoid?

Ask any musician you know…”have you been stolen from?”

0 thoughts on “Tip for Musicians: Guard Your Livelihood”