Living in the Pacific Northwest (PNW) has a lot of advantages…   Killer seafood, alternative lifestyles, music is everywhere and we have the Seattle hotdog.   Though you may have your own opinion on the Seattle dog, let it be known that you are wrong and it is amazing. Amazing I say! #amazeballs  #niceweiner

That being said, a downside of the PNW is as soon as the mountain passes freeze, tour season is over and you can only really perform regionally.  For a band like The Adarna, we thrive on the live show so we have to harness all that energy and cabin fever into writing and recording instead of performing.   The recording process, is a beautiful and frustrating thing.  The goal is always to exceed expectations from your previous work, push yourself as an artist, and create something that is accurate of your band’s live sound.  This winter we are focused on tracking The Adarna’s 3rd official album which will be our first full-length. 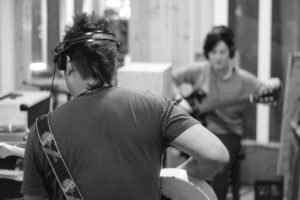 We’ve been chipping away at the recording process in-between touring but now is the time to really buckle down and flush out ideas.    One of the things that we are doing for this album that is unique, for us, is recording parts on our own.  Though we have all been in many recording studios, normally we leave the recording part up to the professionals.  However, times are changing and DIY is still the way to compete and keep costs low.   The more skills you and your team accrue the faster you can achieve your goals.  (This kind of sounds like a video game…)  As a modern-musician you’re expected now to wear many different hats (producer, marketer, manager, brander, fundraiser, networker etc ….oh and performer / musician.)  With that being said, we won’t let the quality drop so if we’re not happy with what we tracked, then we’ll bring in the experts.  The potential is that this could lead to more music being released faster by the band.

So with that being said keep your eyes & ears peeled as we dive into Logic Pro X.   There will be plenty of rants and frustrations on our social networks (Instagram, YouTube, Facebook, Twitter) for you to follow.  There’s a big learning curve against us but this is the age of Siri, Alexa, and YouTube Tutorials.  You should be able to figure out anything right?